It is hard to predict when bubbles will pop, in particular when they are nested within each other. It helps to keep this image in mind when considering one of the biggest surges in asset values of recent years: the market value of all the world’s crypto-currencies has trebled since the beginning of the year, and is now worth more than $60bn (see chart). 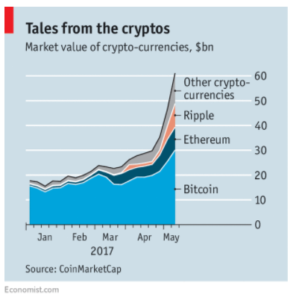 Bitcoin is the best known of these currencies, especially after hackers this month instructed victims to pay ransoms in the anonymous digital cash in order to get their computer files decrypted. Not that many bitcoins exist: there are about 16.3m of them, with only 1,800 new ones minted every day. But growing demand has pushed bitcoin’s price to a record recent high of about $1,830, up from $450 a year ago.

Problems abide. Earlier this year some of the biggest exchanges, such as Bitfinex, experienced problems with their correspondent banks and were unable to pay out real-world currencies to account-holders. To get their money out, they had to buy bitcoin and exchange them elsewhere. Yet the market is becoming more mature: institutional investors, from family offices to hedge funds, have become more comfortable with crypto-currencies, says Mike Komaransky of Cumberland Mining, which arranges over-the-counter trades. Other factors driving demand include fluctuations of China’s yuan, the French elections and, in a small way, the ransomware attack (when The Economist went to press, only about $80,000 had been sent to the bitcoin accounts held by the hackers).

Counter-intuitively, bitcoin’s biggest weakness—the system’s limited capacity—has also increased demand for crypto-currencies. Its developers have argued for years about how to expand the system, which can only handle seven transactions per second, compared with thousands on conventional payment services. Even before worries surfaced that the currency could split in two over the disagreement, bitcoin holders started to diversify into some of the many other crypto-currencies, or “alt.coins”, to emerge in recent years. CoinMarketCap, a website, lists more than 800, from ArcticCoin, an obscure Russian currency, to ZCoin, which boasts added privacy. The latest beneficiary is Ripple, which saw its market value explode from $2bn early this month to over $13bn. Ethereum, which issues “ether”, has jumped from $700m in January to $8.6bn.

Read the full article in The Economist