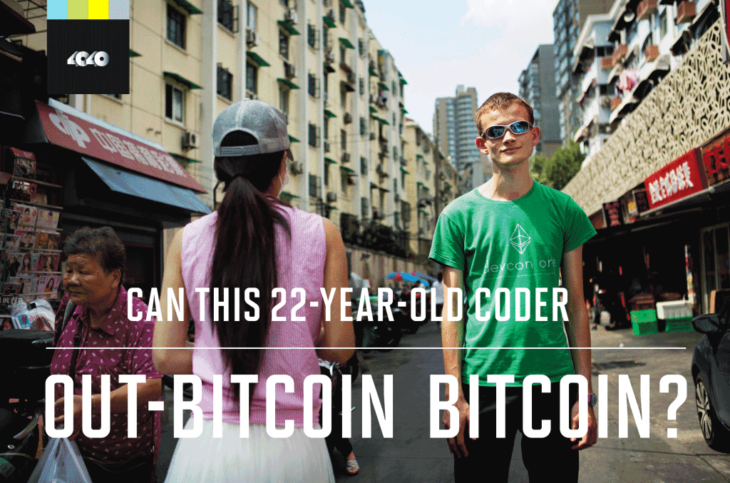 Vitalik Buterin, creator of the fast-growing new cryptocurrency network Ethereum, wants to use his technology to disrupt, well, everything.

The chaos started in the morning hours of Friday, June 17. At 8:15 a.m. Berlin time, Griff Green, a community organizer for Slock.it, a German tech firm, blared an alarm: “EMERGENCY ALERT!” he wrote in a public chat channel.

“PLEASE DM A SLOCK.IT MEMBER ASAP!!!” he continued, addressing stakeholders in a blockbuster venture codeveloped by the company, the DAO (pronounced like the Chinese philosophical tenet), which had been hailed as the most successful crowdfunded project of all time. Three people replied immediately: “Uh oh.” “What is going on?” “Oh shit.”

Green waited another half-hour before adding, “We aren’t sure what is happening but the DAO is in an emergency situation.”

The letters in DAO stood for decentralized autonomous organization, and the idea was that the startup would be a new type of corporation—built on the technology that powers cryptocurrencies, such as Bitcoin—with algorithms executing the strategy instead of human managers. Specifically, its coders intended the DAO to function like a venture capital firm—a kind of Kickstarter-like Kleiner Perkins.

A month earlier thousands of investors had plowed some $160 million into the experimental company. Their contributions were made in Ether, a year-old digital currency (and rival to Bitcoin) that they had exchanged for virtual tokens. The DAO’s creators had designed the software to execute the will of its token holders, based on a tally of their collectively computed votes.

The investors had been assured the money was safe when they deposited it in the DAO. The network powering it was “more secure than every bank put together,” Stephan Tual, one of the DAO’s originators as well as a cofounder and the chief operating officer of Slock.it, had boasted during the project’s funding campaign.

But now a hacker had broken in and was in the process of pilfering their funds. Green recommended that constituents spam the network—clogging its pipes—to slow down the thief. “Yeah sorry guys. this is not a drill,” Green added lamely.

In the chatroom, emotions ran high. “Are we fckd?” one person asked. “Man what a epic failure,” ranted another. “I’m in the bathtub, about to throw a toaster in!” said a third. Another person summarized: “:fire: :fire: :fire: :fire: NOBODY PANIC :fire: :fire: :fire: :fire:” Many drew comparisons to Mt. Gox, a Japanese virtual-currency exchange—once the largest of its kind—that had collapsed in a catastrophic $460 million hack two years prior. Were they now watching the DAO implode too?

By the time Slock.it had regained control the next day, the hacker (or hackers) had stolen more than $50 million—nearly a third of the DAO’s funds. As people scrambled to make sense of the calamity, one name rang out in the forum. “Where is Vitalik?” asked one. “Wake up vitalik,” pleaded another. “Vitalik, our alien overlord, please save us.”

“Calm down,” came a reply. “Vitalik is working on it.”

A month after the hack—and mere days after presiding over a controversial vote to initiate a “hard fork” process that would recover the DAO’s stolen funds and make whole its backers—Vitalik Buterin is listening impassively to a guy wearing a beanie cap shaped like a Pokémon dragon. “This is a really tricky game,” says the man in the hat, an assistant professor of computer engineering, as he excitedly begins to lay out a complicated logic puzzle. But before he can get too far, Buterin quietly interrupts with a clever solution. “Oh,” says the Pokémon prof, crestfallen. “That’s actually pretty cool.”

Buterin (No. 31 on 2016 40 Under 40 list), a 22-year-old coder, is visiting the Cornell University campus for a boot camp organized by IC3, or the Initiative for Cryptocurrencies & Contracts, an academic consortium that researches peer-to-peer payment systems. Roughly two-dozen programmers are gathered around a long conference table inside Gates Hall (as in Bill and Melinda), the brand-new, steel-plated home to Cornell’s computing and information science departments. The air is thick with talk of “stochastic dominance,” “Merkle trees,” and “zk-SNARKs.”

Although he’s among the youngest in the room, Buterin is indisputably the star of the group. He is, after all, the wunderkind creator of Ethereum, the network on which Ether runs. And Ether is now the biggest rival to Bitcoin, the $10 billion cryptocurrency that mysteriously burst onto the scene less than a decade ago.